Starting a Career Journey with Woolworths

Home | News and media | Starting a Career Journey with Woolworths

This year, Woolworths Group is a key sponsor of National Skills Week (23-29 August 2021). National Skills Week sets out to bring to life the talents, skills, career pathways and value of apprentices and trainees across Australia to the wider public and employers. The week is dedicated to raising the status of practical and vocational learning.

As Australia’s largest employer, Woolworths Group is looking forward to showcasing some of the amazing opportunities on offer to young Australians in retail. Woolworths is a food and everyday needs business, which encompasses more than just the supermarkets that customers are most familiar with. Stories like Meagan and Tom’s show us that there are an array of pathways available to grow rewarding careers across Woolworths Group. ‘RE-THINK’ what a career in retail could look like for you!

Meagan Jeffrey began her career at Woolworths Group in 2007 in the Payroll team, when she initially joined as a casual to support the team for just two weeks. Two weeks has now turned into 14 years and Meagan is currently enjoying her role as Agile Team Facilitator helping teams embrace new ways of working.

Meagan’s son, Tom (20) also works at Woolworths part time  in the Fruit and Veg team at the Carindale store. Tom finished high school and took a gap year in 2019 to focus on AFL at a state level. In 2020, he began studying a Bachelor of Business at university but found that he didn’t engage with it and enjoy it as he had hoped .

Tom re-evaluated his career path and is now in the process of applying for a Refrigeration Apprenticeship with Woolworths Group and Meagan is excited to support her son on his career journey.

How did Tom hear about the apprenticeship opportunity and what interested him in applying?

I saw the role advertised  and showed it to Tom. He was interested in applying as he knows it would be a rewarding and secure job in a caring company. He loves working at Woolworths and is looking ahead to a long term career with the company.

Tom has school friends who are  refrigeration apprentices and they all really enjoy the challenge, which has inspired him.

Did you encourage Tom to apply for the apprenticeship? If so, why?

Tom wants a long term career with Woolworths andno longer wants to study at university. This would be an amazing opportunity to learn a trade, continue working for a company that he loves and have a skills based trade that provides security.

What is Tom most excited about doing in the apprenticeship?

Tom is excited to embark on a new career and to learn a new skill with hands-on training. He’s looking forward to learning about other areas of Woolworths and he’s always been curious when the refrigeration mechanics arrive in store.

What are you most excited about for Tom if he gets the apprenticeship opportunity?

I’m glad that he will finally be settled and will have a career path ahead of him that will enable him to work towards an end goal where he will be fully qualified.

The stability that he can gain as an apprentice is significant and will allow Tom to establish a broad base of knowledge as well as experience in a great team. On top of that, he’ll gain real work experience and have the chance to start earning a salary.

It’s very difficult to know what you want to do when you leave school. Tom loves working at Woolworths and I believe he has a wonderful opportunity for a great career.

What advice would you give someone considering taking up an apprenticeship?

Do your homework, make sure this career path is something that interests you and can you see yourself working in this environment for the duration of the apprenticeship and beyond.

Woolworths offers really rewarding career paths and I hope for Tom that he can find happiness and fulfilment in his career. 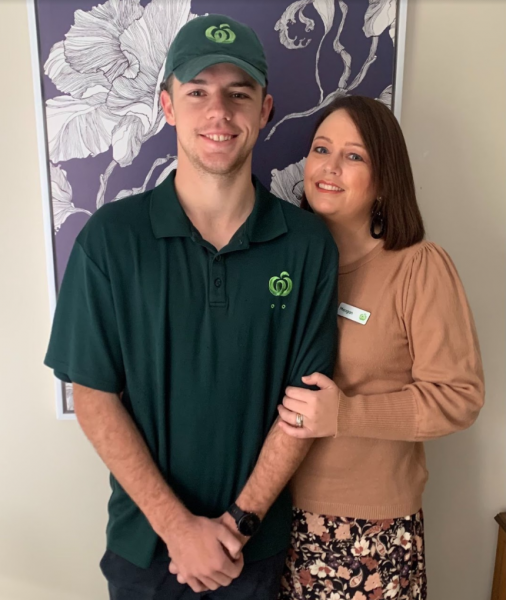 What are you searching for?